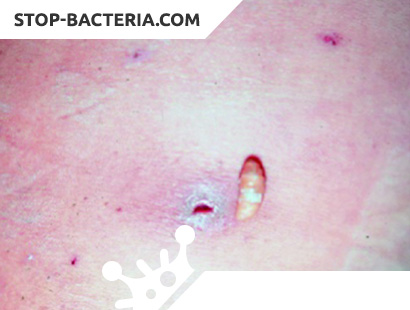 Miaz, myiasis (from the Greek. Myia – a fly, other transcriptions: myiosis, myasis) – a disease caused by the penetration and stay of larvae and adult arthropods in the tissues and cavities of the human body.

Typically, these insects (flies) feed on decaying substances of animal and plant origin; therefore, miasis usually occurs solely in places with poor sanitary conditions; in most cases, the infection occurs as a result of the casual negligence of a person. In humans, the disease can be caused by various species of these insects.

The main miaz pathogens are the thornbill larvae (Cordylobia anthropophaga) and the sand flea (Tunga penetrans), whose females penetrate the skin through their moves, where the fertilized animal swells from eggs to the size of a pea, causing painful ulcerations.

In domestic practice, there are cases of parasitization in humans of wolfarth fly larvae (Wohlfahrtia magnifica) and various gadflies (usually Russian and sheep).

Representatives of the genus Gastcrophilus, Hypoderma, Dermatobia and Cordylobia affect the skin; Fannia affects the digestive tract and urinary system; Phonnia and Wohlfahrtia can infect open wounds and ulcers; Oestrus affect the eyes; as well as Cochliomyia penetrate into the nasal passages and carry out their invasion.

The larvae of flies are relatively stable in relation to various factors, in particular chemical reagents. It is possible to note the ability of the “rat” – the larvae of the Eristalis fly to dwell in wastewater and other highly contaminated places (accumulation of liquid feces, etc.); the larvae of many flies do not die in solutions of formalin or alcohol as compared with the larvae of other insects. All these features of the larvae of flies determine their ability to live for one or another period in an unusual environment for them, for example, in the human intestines, where they can get with food.

Adult flies lay eggs in the eyes, ears, nose, wounds of people or inject them subcutaneously. Less commonly, visceral lesions are observed due to accidental ingestion of the larvae.

Miases are classified both by the location of the larvae in the host and by the biological properties of the larvae of the corresponding species of flies.

Miases are divided into random, optional and obligate.

According to localization, there are skin, tissue, cavity miiasis (ear, nose), intestinal, miiasis of the urinary tract, genitals and ocular.

In all these cases, infection of the host occurs passively. Some flies hatch their larvae in its cavity, in the eye, in ulcers or wounds, others lay eggs there, from which the larvae hatch already in the host. Larvae of some species (Cordylobia) are actively drilled into human skin. There are examples of even pupated stadiums in the host, so the concept of myiasis extends to all cases of any stages of metamorphosis of flies from an egg to puparium in the host or on it.

Intestinal myiasis refers to the cases of living flies larvae in the stomach or intestines of a person.

Infection of the digestive tract with larvae occurs as a result of swallowing them with food or with any other material. The larvae of the cheese fly (Piophila casei) live in salted fish, cheese and can be easily eaten; other flies can lay eggs in already cooked food (for example, boiled meat), and larvae also develop on the same substrate. There are frequent cases of obtaining larvae with vegetables, etc.

Symptoms of intestinal myiasis are different. With the localization of larvae in the stomach, there are nausea, vomiting and sharp pain in the epigastric region. When they are in the intestine, abdominal pain, hemorrhages and typhoid state come to the fore. With prolonged presence of larvae of flies in the intestine, colitis develops. Various types of flies can live in the human digestive tract: indoor fly, meat fly, carrion fly, cheese fly (Piophila casei), Anthomyia (Fannia) canicularis, Anthomyia scalaris, Eristalis, Philaematomyia, etc.

A diagnosis of intestinal myiasis must be made with caution in order to distinguish genuine cases of myiasis from imaginary ones. The latter include cases where patients deliberately mislead the doctor, bringing “parasites” that supposedly leave the intestines. Flies can lay eggs in the already excreted bowel movements, and larvae can hatch from the eggs before the feces get to the doctor for examination; in the latter case, all the larvae will be very small (about 1 mm), while adult larvae reach 1-1.5 cm in length, and sometimes more.

Lesions with myiasis are usually acute. Larvae can eat away all soft tissue to the bones. Outside, the larval course is a reddish filiform thickening of the skin.

The following types of myiasis are distinguished:

Treatment of ulcers on the body of domestic animals to destroy the larvae of flies in them, treatment of ulcers and wounds so that they do not attract flies to the purulent compartment ”protecting food from flies, eating well-washed and cleaned vegetables, especially if they are used fresh ; burning corpses and falling.