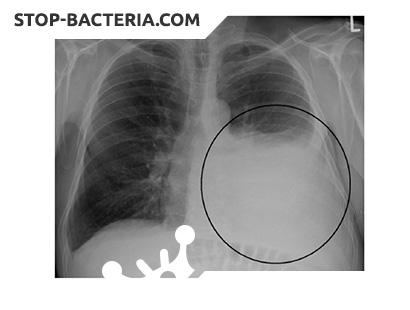 Pleurisy is an inflammation of the pleura. Pleurisy can be an independent form of tuberculosis, but most often it develops as a result of pulmonary and extrapulmonary tuberculosis. Especially often pleurisy is observed in patients with disseminated form of pulmonary tuberculosis, often complicating the course of the primary complex, bronchoadenitis. In cases of idiopathic pleurisy, the focus of tuberculosis infection in the lungs can not be found. However, a thorough examination of exudate indicates that in most cases pleurisy has a tuberculous etiology.

Depending on the pathogenesis distinguish:

Perifocal pleurisy occurs as a result of the spread of tuberculous inflammation to the visceral pleura from a subpleurally located focus or cavity. This pleurisy is also observed with tuberculosis of the intrathoracic lymph nodes, because the latter are localized in the mediastinal and interparticle pleura. Since both pleural sheets are located close to each other, the pathological process extends to the parietal pleura.

Allergic pleurisy develops in a sensitized organism, and the focus is most often in the lymph nodes of the lung root, less often in the lungs, bones, kidneys and other organs, and the motive factor is injury or cooling of the chest. It develops due to the sensitization of the pleura caused by the causative agent of tuberculosis or the products of its vital activity. The latter act as an antigen, on which antibodies are formed and accumulate. Due to the antigen-antibody reaction many biologically active substances are released, which cause an increased permeability of the vascular wall and the formation of effusion. Thus, vascular damage leads to the development of exudative pleurisy.

Tuberculosis of the pleura has been studied due to the extensive use of thoracoscopy. In this case, the tubercular tubercles manifest on the pleura. Mycobacterium tuberculosis affects the pleura in the following ways:

Depending on the nature of the exudate, pleurisy is divided into dry (or fibrinous) and exudative (or common inflammation).

Fibrinous pleurisy can occur as a result of both perifocal inflammation and tuberculosis of the pleura. It is localized in a limited area of ​​the pleura and can be top, costal, paramediastinal, diaphragmatic. It is characteristic for him that there is no free fluid in the pleural cavity.

The surface of the pleura loses its luster, becomes dull. Subsequently, fibrin is deposited on the leaves of the pleura, especially parietal, after the formation of which pleural fusions are formed between the visceral and the hyarietal sheets of the pleura.

Dry pleurisy begins acutely, body temperature rises to 39 ° C, there is a severe dry cough and shortness of breath. The main complaint is a sharp pain of a stitching that appears in the corresponding side. The pain may be acute or blunt. It increases with a tilt in the opposite direction (Shepelman’s symptom) and with a deep inspiration, so the patients breathe superficially. With upper pleurisy, there is sometimes a moderate soreness of the trapezius muscles (Simon Sternberg) and chest (Pottenger symptom). With defeat of the brachial plexus there are signs of plexitis.

Patients with dry pleurisy, as a rule, lie on a healthy side, otherwise the chest wall approaches the lung and the pain intensifies. Percutally only in rare cases can dulling be determined. Auscultation clearly determines the noise of friction of the pleura, which has a characteristic sound, similar to the crunch of snow, the friction of dry hair. Characteristic for the noise of friction of the pleura is also that it is heard throughout the entire phase of inspiration and expiration and changes little after coughing.

To treat patients with dry pleurisy of tuberculosis etiology, specific therapy is prescribed, as well as symptomatic agents that reduce the sensitivity of the pleura to shortness of breath and thereby facilitate the patient’s condition. Assign warming semi-alcohol compresses, mustard plasters, apply iodine mesh. In addition, antitussive drugs are prescribed.

Exudative pleurisy – characterized by the presence of effusion in the pleural cavity.

Pathogenesis. In the process of accumulation of the pleural fluid, there is a definite significance for the disturbance of lymph circulation. Normally, a small amount of serous fluid is contained in the pleural cavity, which swells out of the lymphatic and blood vessels of the visceral pleura, but on the parietal pleura there are “hatches” that terminate the lymph vessels and through how the liquid can be absorbed. During exhalation, the pressure in the chest cavity increases this fluid from the lymphatic vessels, advances to the lymph nodes.

Diagnosis of exudative pleurisy is carried out on the basis of such signs. The patients lie on the side of the pleural lesion, since during breathing the maximum use of the functional capabilities of the healthy lung is ensured. When examined at a significant discharge, the intercostal spaces are protruded, the lag behind the respiration of the affected half of the thorax. The skin in the lower part of the chest becomes edematous, and the skin fold, which is taken with two fingers, is more massive than on the opposite side (Wintrich’s symptom). Voice tremor does not turn out or is sharply weakened. The percussion sound is blunt, auscultatory over the exudate.

Exudate more often accumulates where the lung is more mobile, namely in the lateral and posterolateral part of it. The upper limit of blunting depends on the amount of fluid in the pleural cavity. It is sent anteriorly in those cases when the rear reaches its level to the middle of the scapula (2-4 L). This upper boundary has the form of an arc-shaped Sokolov-Ellis-Damoiso line (from the spine line to the outside upwards, where the upper angle of the scapula, then again outwards and downwards, to the teat line).

Between the Sokolov-Ellis-Damuazo line and the spine there is a space in which the TRC percussion is determined by tympanitis (due to relaxation of the walls of the alveoli), as in the Skoda zone, which is 4-5 cm above the upper border of the exudate. In the upper part of the lung, vesicobronchial or bronchial breathing is heard. The organs of the mediastinum are displaced in the opposite direction.

On a healthy side, dullness of the percussion sound appears in a triangular shape (the triangle of Groco-Rauhfus), formed by the displacement of the mediastinum. Its base is the diaphragm, and the other two sides are formed by the spine and the continuation of the Sokolov-Ellis-Damoiso line.

Radiographically, there is intense darkening with an uneven upper boundary. A variety of exudative pleurisy is pneumoplethritis, which develops with spontaneous pneumothorax or is a complication of medical pneumothorax. In such cases, in the pleural cavity, in addition to the fluid, there is air, from which the name is pneumoplethritis. On the roentgenogram, intense darkening with a horizontal upper boundary is determined.

Treatment. In the treatment of patients with exudative pleurisy, calmness (half-bed or bed rest), appointment of nonspecific, desensitizing agents is important. The use of ascorbic acid (0.5-0.6 g per day) is shown, which normalizes the metabolic processes and promotes the reduction of exudate, as well as compresses that are prepared on the basis of a 15-20% dimexide solution. Patients with exudative pleurisy, as well as pneumoplethritis, along with antituberculous drugs, cortisone or its analogs (prednisone, prednisolone, etc.) is prescribed.

Pleural exudate can resolve. However, if this does not happen for a long time, then after an acute period, a puncture of the pleural cavity and evacuation of the fluid are indicated. Puncture of the pleura is best done in the middle of the area of ​​fluid accumulation. Sometimes aspiration of a small amount of pleural fluid is a push to the beginning of its resorption.

Forecast. Favorable – resorption of exudate with the formation of pleural adhesions. Relatively favorable – after resorption in place of exudate massive pleural joints are formed. Unfavorable – the transition to purulent pleurisy.

Empyema of the pleura

Purulent pleurisy is called empyema of the pleura. Empyema of the pleura in tuberculosis can develop after spontaneous pneumothorax, especially in cases of perforation of the cavity. In such cases, a large number of mycobacteria of tuberculosis enter the pleural cavity and purulent pleurisy develops. With tuberculous pleural empyema, sclerosis and pleural hyalinosis occur, as a result of which it thickens in some cases up to 2 cm. On its inner surface there may be fibrin deposits, caseous tubercles, granulation tissue, and sometimes ulcers.

Unlike nonspecific, in patients with tuberculous pleural empyema, body temperature often rises, and the disease is diagnosed with pleural puncture (“cold” empyema). Empyema of the pleura is a serious disease. The severity of this disease lies in the fact that during treatment you need to systematically do pleural puncture or drainage with the evacuation of pus from the pleural cavity. If this is not done, the patients develop relatively quickly amyloidosis, exhaustion or pulmonary heart failure, which leads to their death. Pus from the pleural cavity can break through the lung tissue in the bronchus. At the same time, the bronchial fistula develops, and the patient’s condition continues to worsen due to aspiration of pus from the pleural cavity during coughing. If pus breaks through the chest wall, a thoracic fistula develops, in which the pleural cavity is inevitably infected with a secondary microflora and a mixed empyema appears.

Treatment of patients with tuberculous pleural empyema is associated with great difficulties, since their body is always depleted or severely weakened. Therefore (if the general condition of the patient and the nature of the tuberculous process in the lungs allow), pleural empyema needs to be raised as early as possible about surgical intervention.
For aspirating pus and air from the pleural cavity, it is better to drain the pleural cavity (drainage from Buhlau). This way you can cure 50 ° / sick. The method of aspiration of exudate and air, as well as active expansion of the lung, is mainly used only in fresh cases of empyema of the pleura.

There are two main methods of surgical treatment of patients with pleural empyema. The first method is reduced to thoracotomy, which is best done in the axillary region. Through the thoracotomy “window” make daily dressings with tampons moistened with disinfectant solution. When the pleural cavity is cleared of pus and covered with a granulation tissue, an upper-toothed thoracoplasty, sometimes a lower-back one, is performed.

After thoracoplasty, the chest wall sinks, and the pleural cavity decreases. The final stage of surgical treatment using this technique is the muscular plastic of the residual pleural cavity and bronchial fistula.

Recently, the operation of pleurrectomy, which was first performed by the French surgeon Delorme in 1883, is often used. Make a wide incision of the chest wall to the pleura. Then, within the cavity, the parietal pleura is peeled off from the thoracic wall and mediastinum, and visceral from the lung. The purulent sac is removed, and the lung is straightened. If necessary, remove and part of the affected lung. The operation of decortication is the separation of layers on the visceral pleura, after which the lung is straightened and fills the cavity of the pleura.