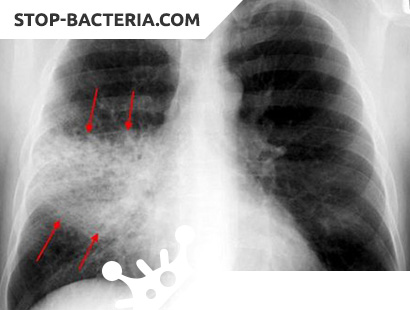 What is Croupous Pneumonia in Children?

Croupous pneumonia is an acute infectious and allergic disease in which inflammatory damage to the lung tissue occurs, exudate rich in fibrin accumulates in the alveoli; the disease has a cyclical course both in terms of pathomorphology and in terms of symptoms.

Causes of Croupous Pneumonia in Children

The disease provokes pneumococcus (different types). They are similar in structure, but their degree of virulence and some of the biological properties differ. Common pneumococcus type IV. Croupous pneumonia in children can also be provoked by pathogenic staphylococci, streptococci, Friedlander’s bacillus, etc. There is a chance of a combination of microbial and viral infections.

Pathogenesis during Croupous Pneumonia in Children

The pathogen enters the body from the environment, which is called the exogenous route of entry. The body for the development of croupous pneumonia must be previously weakened. The following factors contribute to the development of the disease in question:

In some cases, an auto-infectious mechanism for the development of croupous pneumonia occurs. If the child is suddenly overworked or very cold, pneumococci can begin to multiply intensively, penetrating the lower parts of the respiratory tract. It is believed that the pathogen enters the bronchi through the air, spreads through the lymphatic tract.

With croupous pneumonia, there are four stages of pathomorphological changes in the lungs that follow one after the other.

This is the tide stage. Serious vascular disorders, inflammatory edema and hyperemia occur in the affected area of ​​the lung tissue. Microscopic methods show capillaries and small arteries, dilated and crowded with blood. Alveolar cavities are filled with serous exudate mixed with blood and alveolar epithelial cells. Serous or serous hemorrhagic inflammation develops. The duration of this stage is from 1 to 3 days.

This is the stage of red hepatization, the duration of which is also from 1 to 3 days. Further, the diapedesis of red blood cells, the enrichment of exudate with proteins with the loss of fibrin are enhanced. The lung becomes denser due to fibrinous effusion, in which there are many neutrophilic white blood cells and red blood cells. Capillaries are compressed, which leads to malnutrition of lung tissue. The mass of fibrin penetrates into the interalveolar septum.

This is the stage of gray hepatization, which lasts from 2 to 6 days. Red blood cell diapedesis and the accumulation of white blood cells in the exudate ceases. The leukocyte infiltration of the intermediate lung tissue around the capillaries and small veins occurs. The lung turns gray.

This is the resolution stage, lasting from 2 to 5 days. White blood cells begin to secrete proteolytic enzymes, under the influence of which fibrinous exudate gradually liquefies, partially dissolves or clears its throat.

In babies, after the stages of high tide and erythrocyte infiltration, the stage of resolving the disease follows. Degenerative changes in the muscles of the heart, kidneys, and liver occur in croupous pneumonia in a child. But the changes are eliminated when the baby recovers.

Symptoms of Croupous Pneumonia in Children

The disease has a cyclical course, both in children and adolescents. Conventionally, the disease is divided into 3 periods: onset, height and recovery (resolution). Croupous pneumonia begins acutely, with an increase in temperature to 39 – 40 ° C. Children, unlike adults, rarely have flank pain and chills. In the early days, babies may not even have a cough.

The second variant of the development of the disease:

The above symptoms resemble meningitis. But by rapid breathing, a gradual weakening of meningeal phenomena and the appearance of other symptoms characteristic of pneumonia, these diseases can be distinguished. In children from 7 to 16 years old, the disease is typical. First, there is a high fever, chest pain, chills, cough. Shallow frequent breathing is recorded (30-40 in 1 minute). The child’s eyes shine, a blush appears on the cheek of the affected half of the lung. Herpes pops up on the leg and lips. The following symptoms are likely: agitation or lethargy, hallucinations, delirium.

From the first days of croupous pneumonia in children, the auxiliary muscles of the chest participate in the respiratory act, the child inflates the wings of the nose when breathing. Further, when breathing, the child groans and groans, coughing causes painful sensations. The child lies in bed on a sore side.

Doctors determine at the onset of the disease an increase in vocal tremor on the affected side. When listening, breathing is weakened. The further, the more difficult the child’s condition becomes. The temperature remains high, but on rare occasions it can be intermittent. In the midst of the disease, shortness of breath becomes more and more, in bed the child is half-sitting, cyanosis of the face, lips, arms, legs, as well as puffiness are observed. Symptoms such as dryness of the tongue and lips, coughing up of viscous vitreous sputum, which has an admixture of blood (respectively, a “rusty” tint), are characteristic of the height of croupous pneumonia in children. Chest pain gradually stops. The child’s pulse reaches 120-140 beats per minute, the filling is weak. Decreased blood pressure, enlarged liver, and bloating are also characteristic of the height of the disease.

Blood tests at the peak of the disease show leukocytosis with a shift in the formula to the left, increased ESR, the amount of globulins, fibrinogen. Diuresis decreases, the relative density of urine increases. The gas composition of the blood changes. On the fifth or ninth day or even earlier, the temperature returns to normal, the recovery period begins. Changes in the lungs disappear rather quickly, as does shortness of breath. The phlegm is more easily separated. Herpetic eruptions dry up, crusts form in their place. Wheezing is more sonorous.

Complications of lobar pneumonia
Complication of lobar pneumonia is extremely rare due to modern treatment methods. But still likely gangrene, lung abscess. With complications, the child’s condition worsens, the temperature rises even more, and the amount of sputum increases, it becomes purulent. Almost always, croupous pneumonia is accompanied by dry pleurisy with fibrinous layers. Very rarely, lung carnification is observed – its germination with connective tissue and the subsequent development of bronchiectasis.

Diagnostics of the Croupous Pneumonia in Children

Typical croupous pneumonia in children is recognized quite easily by the characteristic symptoms described above. When diagnosing croupous pneumonia, it is necessary to exclude focal confluent pneumonia, which is characterized by the variegation of auscultatory data and the absence of a cyclical course. With segmental pneumonia, children do not have herpes on the nose and lips, the disease does not proceed cyclically, and radiographs also differ.

With exudative pleurisy, dullness is localized over the lower parts of the chest, there is its characteristic outline of the upper border. With pleurisy in a child in the area of ​​dullness, breathing is sharply weakened or not heard at all, voice tremors and bronchophonia are not detected. If the diagnosis is complicated, X-ray and test puncture are performed.

Treatment of Croupous Pneumonia in Children

For the treatment of lobar pneumonia in children, complex treatment with sulfonamides and one of the antibiotics is used. Tetracycline is effective – the dose is gradually reduced, focusing on improving the patient’s condition. Pay attention not only to the abatement of the main symptoms of the disease, but also to the restoration of the impaired functions of the nervous system in cases that occur with significant toxicosis.

If we compare the treatment of the disease in question in children with antibiotics and sulfonamides, then it is worth noting that when treating severe forms of lobar pneumonia with antibiotics, toxicosis disappears faster, the functions of the cardiovascular system are less disturbed, and disturbed types of metabolism are restored rather than with treatment with sulfonamides.

Oxygen therapy is likely. With severe pain in the localization of the lesion, UHF therapy is used, sometimes mustard plasters and quartz irradiation. When the process is resolved, diathermy is shown.

Prevention of Croupous Pneumonia in Children

Teach your child to breathe through the nose to avoid irritating the throat with cold or polluted air. With the appearance of an acute catarrh of the respiratory tract, vigorous therapeutic and preventive measures are required, especially in children who have repeatedly suffered from croupous or other pneumonia.